Dozing, high-tech and the ECA

Happy Friday night everybody!
Today has been a duvet day to help aid my recovery from yesterday’s glamour photo shoot.  The day’s activities included writing two e-mails, watching two episodes of The Sopranos and dozing.  I thought that this would be the best plan of action before the inevitably busy weekend, particularly as my swallow and speech were sleepier than usual this morning.  Both appear to be re-gaining strength and so this will be a quick post so as not to counteract the day’s efforts. 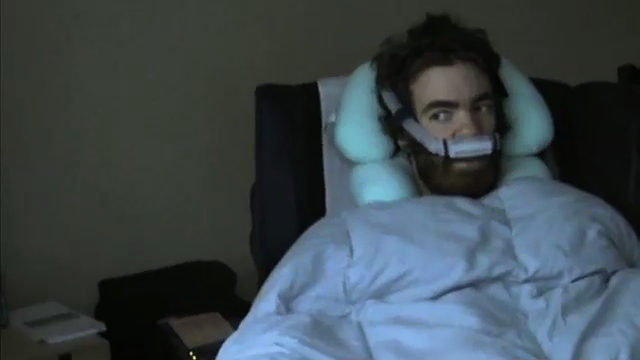 I did have some good news today from a company called AbilityNet.  With funding provided by the Motor Neurone Disease Association, on Monday I will receive delivery of my new high-speed laptop, the latest version of the speech recognition software, a high sensitivity microphone, special head-operated switches which act as mouse buttons, and custom software which divides the screen up in the simplest way depending on which application I use.  This should obviously helped me a great deal to continue to communicate with all of you in the outside world.  I am very excited and would like to thank Hilary (my speech and language therapist) and the MNDA for making it happen.

On a completely different subject, I have been taking a walk down memory lane as a result of the messages of support from friends from the Edinburgh College of Art, where I did my architecture degree.  A very pleasant stroll it has been too; my years spent in Edinburgh constitute the second best period of my life (the first being the afternoon spent with Sir Jimmy Savile, sorry Louise and Oscar!).

I’ll leave it there for today but wish you all a great weekend.
All my love,
Neil x

Waking Neil up in the morning was now a difficult and slow process. Difficult because his speech was very slurred but his needs were so precise that I didn’t want to misunderstand his requests, for example, he could be asking to ‘sit up’ and I would hear ‘sip water’. It was always frustrating to me that his written words on the blog didn’t give any indication of the struggle it took to form them.

His speech at this point did get better throughout the day, which I think was enough for both of us to think that we had more time. It was an incredible responsibility for me to be interpreting his speech when it was bad. I was translating for other people sometimes, just the same way that I was translating Oscar’s new found words, yet another cruel parallel.

Before the meeting with the representative from AbilityNet Neil had been convinced that he would be better off with the system that he was already familiar with, as it takes time to build up voice recognition and he didn't want to have to start again with a new program. I think he was dreading the thought that this new tech wouldn’t recognise his speech, that he was too unintelligible already, and his criteria in the Advance Directive was fast approaching. As long as nothing flagged up a change then he would carry on as if there had been none.

However, this turned out to be one of the good days, he felt uplifted after the meeting with AbilityNet, and was excited at the skill of the technology on offer. Anything that improved his ability to communicate improved his quality of life. – Louise (2013)