…what to expect when you open your eyes in the mornings. Today, ladies and gentlemen, has been no less surprising.

Today was supposed to be a quiet duvet day to counteract the excitement of the last few. Despite having a few restful nights, I still feel fairly fatigued and my swallowing has not really improved (soup and all things mashed are my friends at the moment). As such, I thought a few extra hours in bed would be appropriate.

However, not long after the palliative care team had left me tucked up as snug as the proverbial bug, I received a telephone call asking me if I could do an interview for our local radio station this afternoon. Never one to turn down an opportunity to further our cause, I agreed instantly. The interview is to provide background information to a feature publicising a local fundraising event organised by a friend of mine, Victoria Holdsworth. You may have seen her comments on the blog informing you of the battle of the bands competition she is hosting in support of MNDA. We hope that there will be a link to the piece on Radio Aire’s website which is due to be broadcast sometime tomorrow morning on 96.3 FM. I am sure Vicky will keep us up to date with the latest via the blog.

You will all know me well enough by now to realise that the chap who came to interview me left with his ears bleeding after listening to me rant on for three quarters of an hour; you will also know that the above, plus the regular hours of talking to my computer, has left me completely knackered. 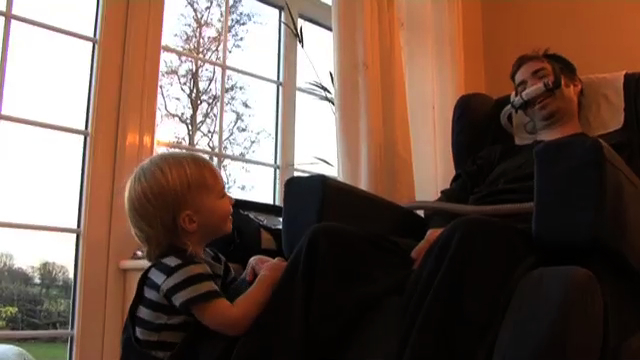 As such, I will leave further ramblings until tomorrow, when I also hope to bring you the latest footage of our little bruiser (he actually was given a 'time-out' at nursery school today!).

All my love,
Neil  x

Neil was so driven, he would have dealt with publicity for I AM BREATHING so much better than I do, he would not have stumbled for words, he knew exactly what to say. It’s so sad that he’s not here to see how much attention his truth and honesty is beginning to attract. That’s exactly what he wanted to achieve... awareness.

I had been out of the house for the afternoon, the day of this post.  It was a nursery day and I was determined that life would carry on with as much routine as possible for Oscar. He only went to nursery for two afternoons a week but he got so much from these sessions, interacting with other children. We had a Marie Curie sitter in for Neil so I was able to take some time off, which usually involved retail therapy, spending money I didn’t have. A couple of times my friend or my mother helped me get my spending in to the house unnoticed by Neil, passing it through my bedroom window. This was not solely because I had spent the money, it was also because I had been buying nice clothes for occasions I did not have. I knew if Neil asked to see them it would just get him upset – that part of our life had gone, we couldn’t even go out to dinner. I wore a new shirt to the hospice once and he was upset because he said I looked really nice in it. What could he do but look? That part of our marriage was gone too.

I was amazed when I arrived home that day and heard that Neil had done a radio interview, he barely had the energy to speak. Had I been home and received the initial call I may have tried to stop it happening, purely to protect him from becoming exhausted, but I’m glad now that I didn’t get in the way of letting him speak. – Louise (2013)