Then Janus came. Janus Billeskow Jensen – an editing hero from Denmark who was our wise mentor in the process. He is a much sought-after editor but also advises on many films. He had worked on Burma VJ, Girl with the Dragon Tattoo, most of Bille August's work, the shorter version of The Act of Killing... We had sent him rushes. He liked them and agreed to come and advise.

It is very Danish to share the difficulties of the edit process within the filmmaking community and to challenge each other - somehow in a way that you could still hear and not just go to a defensive place. That is why we were so keen to involve these Danes. He arrived at Edinburgh Airport with a beautiful black hat and suitcase on wheels and said he had come to give us a smack. This is what they did in Denmark for each other apparently in edit suites.

When Janus came, he didn't cut much at all – but  spent a long time looking at footage with us and asking us questions. We couldn't always really answer them, but their integrity informed so much of our process. The answers were not what mattered – but understanding where the curiosity of the unanswered questions led us.

We showed Janus excerpts from most of the material, and then one lunch time he asked: "Is that all?"

We confessed there was this tape we hadn't quite had the courage to see yet. It was filmed by the family the day before Neil died and was footage of him reciting his 100th blog post to his wife and sharing his desire to go to the hospice to end his life. We knew it would be strong but somehow were still too traumatised by his death to see it. Janus looked impish when we told him about it. He smiled and said: "That is what we'll do after lunch."

So the tape came out the shoe box. Janus leaning towards the footage saying "interesting, interesting" – and Morag and I in tears.

But the footage was so much richer than just tragedy or sadness. Neil being Neil didn't just dictate his desire to end his life but – even though he could hardly breathe – started to correct his wife's punctuation, insisting on semicolons, playing with words –especially his newly invented word for Louise, "spidow". It took ages for him to communicate this joke but he was totally determined to do this. As ever – he amazed us. Just after sharing his desire to go to the hospice:

"It's a difficult, bordering on impossible, decision for me to make as I have to decide whether to ease the suffering or hang on for the purely selfish notion of seeing them for a few extra days or minutes. The reason I have chosen to go to the hospice tomorrow is to draw the curtains over what has been a devastating, degrading year and a half."

He shifts into comic mode –

"You may have noticed that some of the jovial nature of my usual entries is or has been somewhat lacking over the last day or two. Please don't think that this is because I can't, it is merely to help Louise carry on the baton without too much pressure to be as witty. I accept comedy as being one of my natural gifts, just don't expect the same from Louise, my beloved widspouse / spidow. (I'm not dead yet.)" 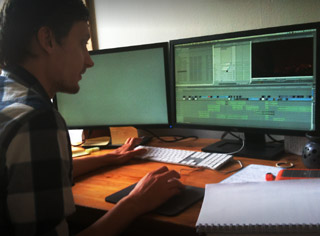 The camera tape ran out soon after, and he sent his cousin Jill out to get another one. This footage was so strong and wonderful that with Janus we made one or two cuts in it and all felt it should almost go in unedited apart from that.

Ultimately, when we edited the film with the hugely talented Peter Winther (also Danish, pictured), it wasn't possible to use the jokes Neil made in this tape... despite trying. It just didn't work to go to humour a that stage in the film, and it took so long to get the joke out that it felt even more agonising. This is the bit we left out that I would have liked in. Neil surprising us right up until the end.

The tape that was in the box.