The Eagle has landed at Casa St Michael

Hi there guys and gals,
Well here I am, deposited, fully installed, fully settled, fully satisfied, and fully ventilated.  Back for another two weeks of basically being spoiled rotten at St Michael's Hospice, I even get to have a bath and you have no idea what that means to me!

I would love to have another prolonged writing session, which equals me saying something to my computer – it typing it wrong – me saying the same thing again – ditto – etc and so on, but I’m afraid writing this has done me in for the day.

Oh, I nearly forgot an error in my last post which requires correction.  The Vectra ownership is solved, thanks you two – they know who they are!

I’ll speak to you all tomorrow, with love,
Neil

I wouldn’t say Neil was looking forward to another stay in the hospice, but he certainly knew this time around that there were benefits in going there.

Most importantly, and something that neither of us had realised before the first period of respite at St. Michael's, there would be a doctor on hand daily. The reason this was important was that with daily assessment, they were able to adjust and balance his medication to his greatest comfort. This also helped to stabilise his digestive system which was not directly affected by motor neurone disease, but with all of the medication he was taking, he frequently had an upset stomach or bowels, and his physical state made this quite frightening to deal with, particularly if he felt nauseous. 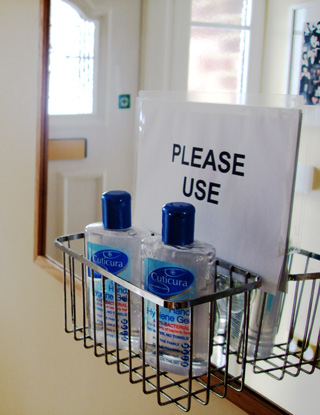 He was terrified at the thought of vomiting without being able to cough. (Oscar had brought a vomiting bug home from nursery not long before Christmas which had proved to be highly contagious after taking down myself and two other people who were helping us in the house. Concerned that it might spread to Neil, from that moment on I put antibacterial hand gel at the front door with a sign saying ‘PLEASE USE’.)  So balancing his medication made him feel a lot more comfortable.

Once again he would have the benefit of a fantastic chef who would tailor the menu to his needs, have access to a bath and the relaxation of alternative therapies. This time he would also have the comfort of having his mother stay with him in his room, the hospice were very accommodating to Neil’s needs and this gave him an extra bit of confidence that he had someone there solely for him. It wasn’t home but it was the best alternative. – Louise (2013)