No this is not a joke, it really happened. Hi all,

Last night, as Rosie and I sat in the lounge watching TV and Louise sat at the computer in the kitchen, we heard three definite knocks at the patio doors. These were followed by a series of other knocks of varying intensity. Some were so loud that Louise came through from the kitchen.  We all looked at each other, clearly concerned about who would be at the back of our house at 1030 at night.  Louise’s mum crossed the room and parted the curtains to see nothing but an empty garden covered in snow.  The knocking came again but this time we identified the source, simply distant fireworks echoing through the night. 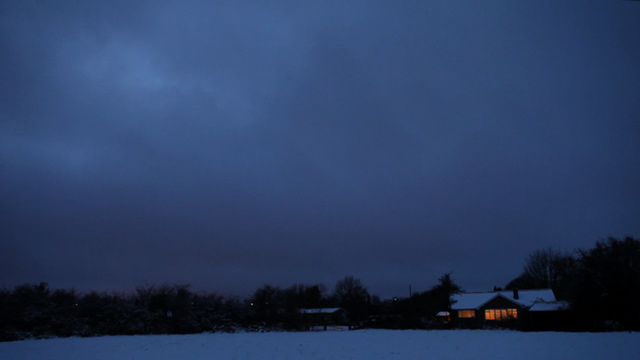 For the first time I realised something.  I realised how weak and vulnerable I was. That despite the power of my voice, which I wield like a sword making requests, barking orders or cutting down any opposition to my arguments, I would only be able to blink in defence of my family against the real and dangerous things the outside world contains.  I felt as defenceless as an infant.  It was a truly horrible feeling.  Since Louise and I have been a couple, it has been instinctive to me to protect her (even before this when we used to cry on each other’s shoulders over the latest relationship disaster), and losing the ability to do this has come crashing down on me like a tonne of anything.

With that realisation came a wave of new, unpleasant and self pitying sensation. For a short while, I felt burdensome. Of course I realise that my loved ones do not consider this to be the case at all and no doubt I will be berated for thinking as such. I believe that this feeling is result of my accepting how dependent I really am. You are no doubt thinking, as am I, that this has come late in the proceedings; I agree and could only tribute this to my stubbornness in facing my illness and refusal to concede any part of my personality to it. And in case you’re wondering, my stubbornness has returned twofold overnight and I feel a burden no longer.

I only tell you the above in the interests of transparency and certainly not sympathy. It is simply a part of my story and a direct result of motor neurone disease.

The reason for this early post is that our friends arrive shortly from London for the weekend. I am therefore looking forward to enjoying their company, conversation and comfort their presence always brings, which will no doubt result in some happier tales to tell over the next few days.
All my love,
Neil x

I had been aware of our vulnerability for a while, ever since Neil’s end of life meds had arrived in the house and I was made aware they had to be hidden in a place that only I knew. I had realised that the publicity Neil had whipped up almost advertised the fact that we had opiates in the house and we were in a physically weakened position.

A couple of times we had experienced cars coming down the lane in the night, but they turned and left, probably didn’t know that the lane was a dead end. My mum was staying outside in the caravan, it was a private space for her, a constant space, rather than the sofabed in the livingroom that we would have to keep tidying away and it was a place to call her own at the house. It wasn’t a perfect situation, especially as the ground was covered in snow, but it did work. The cars turning, however, had our heart rates up.

The banging that night, even though it had turned out to be fireworks, was enough to make us all aware that the bubble that separated us from the outside world was very thin. My protective nature had long since kicked in and I felt responsible for the safety of everyone in the house, Neil, Oscar, my mum, and Neil’s mum.

The thought of vulnerability was one that I just had to bury, there was far too much else to think about, but I know that it hit the man of the house hard. – Louise (2013)