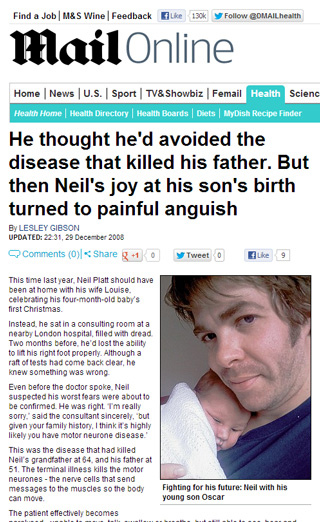 I don’t get much sleep most nights because my husband is dying in the next room. I got less sleep last night because Oscar was coughing and I was scared he would wake up Neil. I can’t sleep tonight because, just before I went to bed, I read comments left on the Daily Mail website about our article and some people took the opportunity to tell us how irresponsible and selfish we were to have had a child.

In the morning, I have to get up and tear myself between a one year old and a man who is literally dying before my eyes. We’ve chosen to tell our story to benefit others, not for the scrutiny of ourselves. We got through Christmas and New Year without upset. Now I’m exhausted and disappointed, and just when I think, ‘It can’t get any harder than this’, it does… every time. 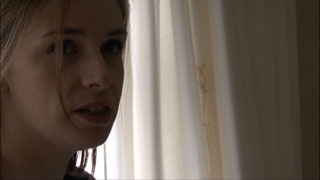 There was nothing else I could do to relieve my anger. The more I lay in bed and let it bubble through my veins, the less chance I had of sleeping at all that night. Sleep was so precious and every minute I tried not to think about these comments was a minute more lost of sleep. It must have been about 2 o’clock in the morning before I finally gave in, crept to the kitchen and turned on the computer.

After I wrote this I went straight back to bed and it was a quiet night, no coughing, no teething, no ventilator beeping. When I got up the next morning Neil had woken early, already seen my post, and was composing his reply [we're re-publishing it tomorrow – Ed.]. Pat, his night-sitter, had caught me in the kitchen in the middle of the night and tried to persuade me to go to bed. She must have told him I had been writing.

At least I got some sleep.

This was one of these blog posts where the comments from family, friends and strangers across the world lifted me up, kept me going and got me through another day. A friend of mine suggested that I should try to get in touch with the Jeremy Vine show again, as this was just the sort of ‘crappy debate’ that might get motor neurone disease some airtime. I had no intention of doing so, but the thought of my friend promising to phone in as ‘Angry from Glasgow’ was enough to cheer me up.

In a way, the people making those comments on the Daily Mail article had done me a favour by becoming justified recipients of my anger. – Louise (2013)

Kay Hobbs
January 8, 2009 at 2:19 pm
Darling Loiuse and Neil
I emailed Louise as soon as I read this blog. But my anger is a slow burning one and I really want to scream at the Ivory Tower dwellers to dare God to do the same to them. Only then would they be in a position to comment. Except, being in the same position as you guys, I wouldn’t wish this hell on anyone. Not even the totally ignorant bullies who feel the need to vent their desire for leashing unwarrented and misinformed opinions on the vulnerable. The only reason I survive mentally is the existence of a much longed for and loved daughter. I expect you guys are the same. Being on the edge of a nervous breakdown whilst suffering from acute exhaustion becomes a tiny inconvenience when I look at my baby’s beautiful face. And you never know, our children may even hold the key to finding a cure. Or they may be the ones do do it. I have also read Neil’s reply and I think he should send it in to the Daily Mail.

I can never understand why people feel they have the right to comment on someone else’s life and the decisions that they make. My view is that unless you have walked a lifetime in that person’s shoes, you really don’t know so you have no right to judge and even less right to comment….but people do.

Louise, you are a brave, kind, beautiful woman who I only know a little of…Oscar is a lucky boy to have such a fantastic mummy and judging by your husbands posts, he has a pretty amazing daddy aswell.

Don’t get disappoionted lovely, these people that make such judgements and comments are showing astounding arrogance and ignorance and don’t deserve a moment of you thoughts…you have enough to think about already.

I agree with the lady above, Neil should send his post to the Daily Mail.

Reply
Sarah Jane Thomson
January 10, 2009 at 6:54 am
Hi Louise, I don’t know if you remember me. I am Jane McElligott’s neice, my dad is Don Calder. I just wanted you to know that you and Neil and Oscar are in our thoughts and prayers here in Squamish, British Columbia. I feel so fortunate that you and Neil have had the courage to tell your story and have no doubt that your little Oscar will have an incredible life ahead. I will be spreading the word about the need for attention towards MND here on the West Coast. I wish you restful nights and peaceful days.
Sarah-Jane Thomson
@breathingfilm tweeted this page. 2013-04-17 19:31:30 +0100
Louise can't sleep, but not because her husband's dying or her toddler crying... #Plattitude #MND #ALS http://www.iambreathingfilm.com/i_cant_sleep?recruiter_id=2
Reply · Retweet · Favorite
THE THIN SPACE BETWEEN LIFE AND DEATH
Film by Emma Davie & Morag McKinnon
Latest news: Fire and Ice
Latest screenings:
17 Nov · World premiere at IDFA
18 Nov · IDFA (2nd screening)
19 Nov · IDFA (3rd screening)