Hello – I’m Louise’s brother and contrary to popular belief, I am not always right!

A couple of days ago, Neil called me and asked me to make a few changes to The Plattitude. This evening, I took advantage of the fact that the kids were in bed and sat down at my computer to carry out Neil’s simple request. Unfortunately, in my haste to act as a dutiful brother-in-law, I accidentally deleted the entire database of the site! 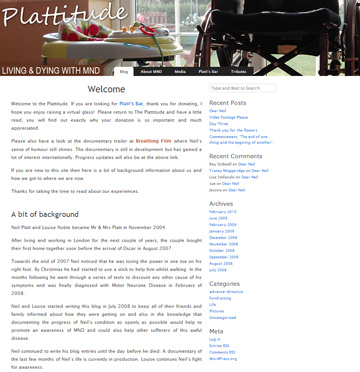 [This refers to the old Plattitude, not this one here! – Ed.]

The last backup I had of the site was from the 27th of December, as you can see, using various methods I have been able to restore most of the missing content from between the 27th and today back on to the site. You will probably notice that there are still some comments missing – some of these I have saved and will upload tomorrow and some, I am still looking for. Most browsers keep a cache of recently viewed pages, I managed to retrieve some of the comments from the cache’s on Louise & Neil’s and my machines. Could anyone who knows how to please check their browser cache, remembering to put it into offline mode before looking at any pages otherwise they may be overwritten. If you find any of the missing comments please email me and I will put them back on my email address is [email protected]

It goes without saying that I feel like a complete idiot and that I am genuinely very sorry for the upset caused by, what can only be described as, an act of sheer stupidity.

If it is any consolation, I dropped my entire dinner over my only clean suit just minutes after deleting the content…

On a more positive note. Whilst panicking and trying to go through every possible method of restoring the site I sent a support request to MediaTemple who host the server that this site is on. Unfortunately there was nothing they could do.  Just afterwards Sara noticed that her just-giving total had gone up by a tenner and checked to see who was donating at this time in the morning. The support rep, Brandon from MediaTemple had kindly made a donation. This sort of act gives you faith in the humanity and generosity of most people and makes me all the more sorry that I have managed to lose comments from people, many of whom don’t know Louise or Neil directly but have made the effort to voice their support.

It had been a dreadful two days. What had started out as a blog for friends and family had grown into something so important to Neil and a lifeline to the outside world for both of us. My brother felt awful and Neil was angry, so I felt awful. My brother had set up The Plattitude in his spare time. I was angry at Neil for being angry at Douglas as without him, we would never have had a blog in the first place. Emotions in the house became irrational, but for Neil, his line of communication was lost and it set off a panic. It was like his voice had been cut short.

Luckily in the end virtually nothing was lost. I was shocked at how much The Plattitude had become part of our lives and it gave me an insight into how life would have been like had we not started writing it, had Neil not had a focus in his day aside from his mortality. Quite unbearable. – Louise (2013)

admin
January 8, 2009 at 12:51 pm
In particular if anyone has any of the 21 comments which were left on Louise’s “I can’t sleep” article I would be very grateful.

Douglas
January 9, 2009 at 12:45 am
Thanks to everyone who sent offers of help. Just to let you know, all the comments are safe and well and I will get them back on the site asap. Anyone who subscribed as a new user between 27th Dec and 7th of January may need to re-subscribe or request a new password.
THE THIN SPACE BETWEEN LIFE AND DEATH
Film by Emma Davie & Morag McKinnon
Latest news: Fire and Ice
Latest screenings:
17 Nov · World premiere at IDFA
18 Nov · IDFA (2nd screening)
19 Nov · IDFA (3rd screening)